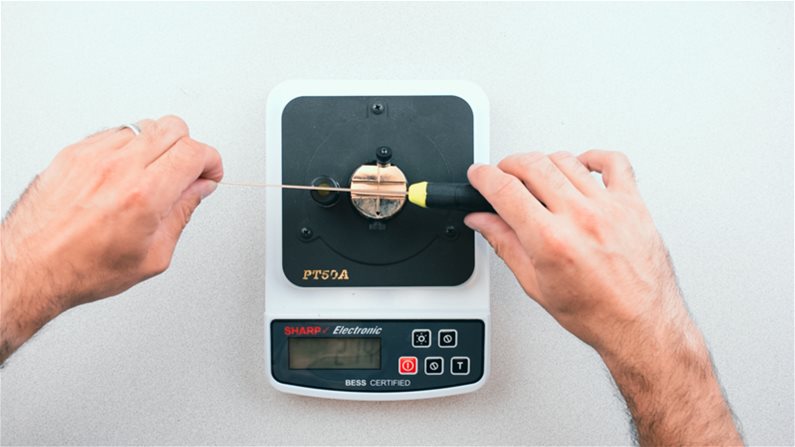 We tested the Morakniv Companion Fillet Knife 155 on our Edge On Up Industrial Edge Tester.

Based on the visual inspection of the knife, we expected the edge to be quite sharp. Our testing proved that it was indeed sharp. The average of our 3 tests gave it a score of 225 grams. That is on the sharper end of the scale for any knife and would indeed be ready to use right out of the box. The area tested in the middle of the blade was a bit more dull with a score of 287 grams while the tip was extremely sharp at 173 grams. The results suggest that a bit of stropping may improve the middle of the blade significantly.

Stropping the Morakniv Fillet Knife to Improve the Edge 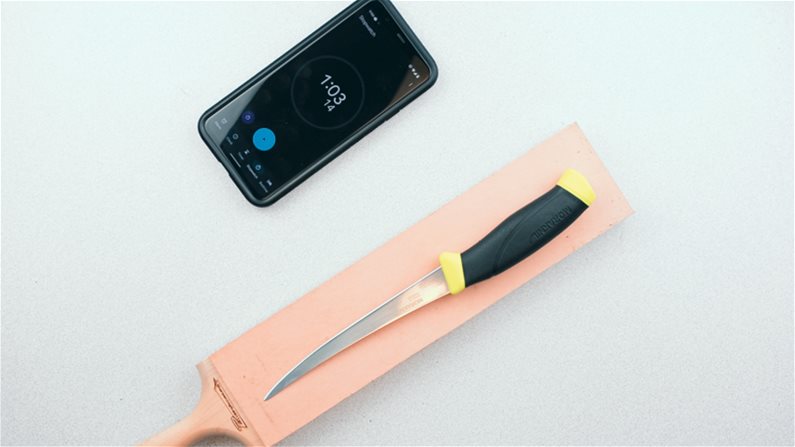 We stropped the fillet knife on the Sharpening Supplies Double-Sided Paddle Strop. 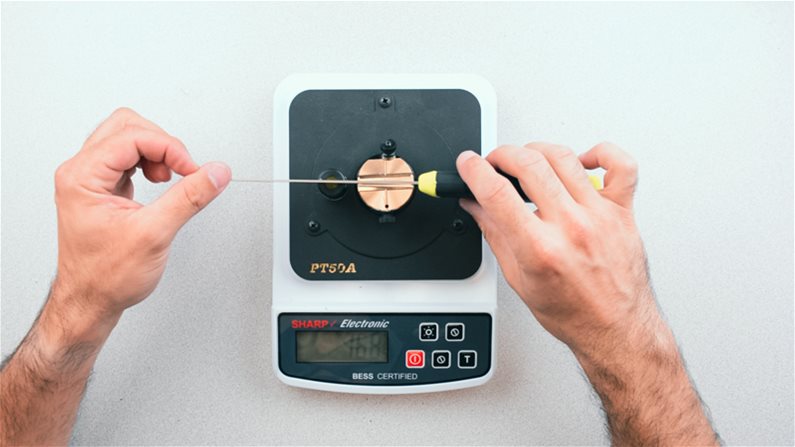 After stropping, we tested the MoraKniv Fillet Knife again on the Edge On Up Industrial Edge Tester.

Stropping the Morakniv fillet knife produced some somewhat unexpected results. We expected to see a significant improvement in the middle of the knife, and we did. The middle of the knife dropped from 287 grams down to a very sharp 174 grams. But we didn't expect to see such a nice improvement to the heel and tip of the knife. The most surprising was the tip since it was already so sharp. With the quick stropping, the tip dropped from 173 to 127. That big of an improvement on an already sharp knife is rather remarkable for so little effort.

At this point, further stropping could make it sharper, but it is unlikely to make it cut any better since it is so sharp. Our consensus recommendation is to go ahead and use the knife.

In the past, we've tested fillet knives (not from Morakniv) and have found that some have trouble keeping an edge and will dull after just one fish. We suspected that the softer flexible steel of a fillet knife is more likely to dull more quickly. However, we also know that not all fillet knives dull quickly, so this is a test we're really anxious to complete.

To test this knife, John will be taking the fillet knife on a fishing trip to Canada. If all goes well, there will be plenty of walleye to fillet, so it can be used for its intended purpose. When he returns, he will test this knife again to see if it held its edge. If you'd like to see the results, please follow us on social media or check this page for updates.

The final leg of our trip to Canada was by plane. Our vintage Dehavilland Otter dropped us off at our cabin on the southern shore of Arril Lake in Ontario. Our cabin was the only cabin on the lake, so our group of 6 fishermen were truly alone once our plane dropped us off. 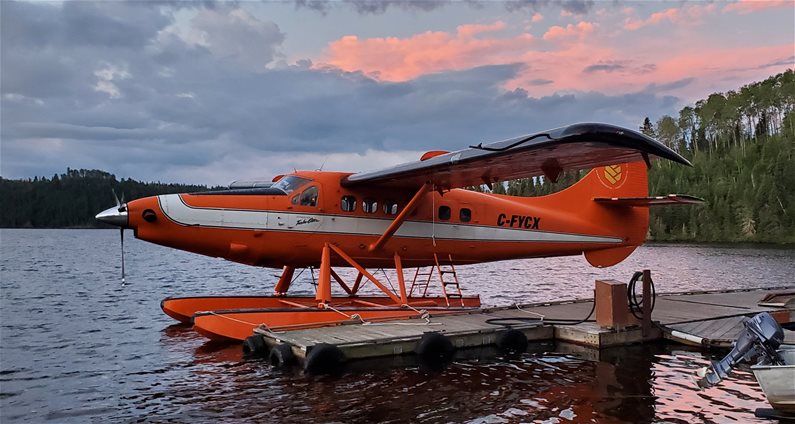 To get to our final destination on Arril Lake in Ontario, Canada, we took this Dehavilland Otter.

While fishing a new lake can take some time to find the fish, we had no trouble landing walleye after walleye. Our first day was rainy, but walleyes have never seemed to mind a little rain. In the following days, the weather improved, and despite the clear sky, the walleye kept biting. 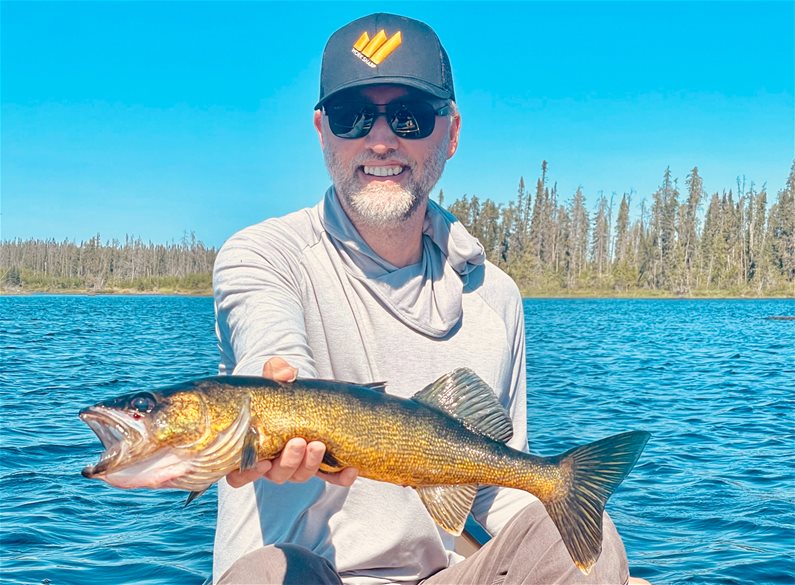 John, the founder of Sharpening Supplies holding up his dinner.

When possible, using the knife for its intended purpose is how we prefer to test. There are times when a more scientific test is critical, but we set out to test this fillet knife as a fillet knife and that is what we did.

With all of the fish to fillet, we took 2 fillet knives on our trip to Canada. I’ve been burned in the past with fillet knives that wouldn’t hold an edge, so we did bring another fillet knife as a backup. On previous trips, I brought and used a sharpener to keep the knives sharp. On this trip, I packed some sharpeners to ensure we had sharp fillet knives.

In total, we caught and released hundreds of fish and filleted a few dozen fish over the course of our 5-day trip. The fillet knives got plenty of real-world use. I didn’t keep an exact tally of fish, nor did I photograph the filleting process.

The fillet knife in its natural habitat.

While in Canada, even by the end, the Morakniv fillet knife was still cutting well and holding an edge. This was a very positive outcome, as I’ve brought fillet knives to Canada that wouldn’t hold an edge for more than one fish, let alone an entire trip of filleting.

Even though I felt like our knife was still sharp, I had to test the edge to see how it held up. For this test, we used our trusty Edge On Up Industrial Tester. This knife was sharp, but I held out hope that it was still really sharp according to our tests. If we dig into the number, the tip was 405, the middle of the blade was 369 and the heel was 245. This is in line with a new knife, so after this much use, that is really still quite good. These numbers indicate that it was now duller than when brand new, but because it was rather sharp to start, that isn’t necessarily unexpected. One curious piece of data was how much the tip dulled. That was initially the sharpest and was now the dullest. Likely the duller tip has more to do with which part of the blade got the most use, so it may be a good approximation of what the entire knife would do with more use.

Overall, the measured sharpness was a little bit less than I expected. Not because it wasn’t sharp, but because I held out hope that it was even sharper. This illustrates the limitation of using your thumb sharpness tester. At most, I can tell you if something is really sharp, sharp, not sharp, or dull by using my thumb.

In conclusion, I plan to add this knife to my tackle box so I can make it my everyday fillet knife. My next update will be after I sharpen the fillet knife to see how sharp I can make it. Stay tuned for a future update. 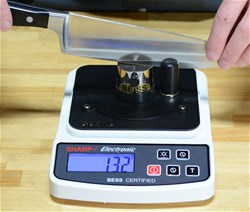